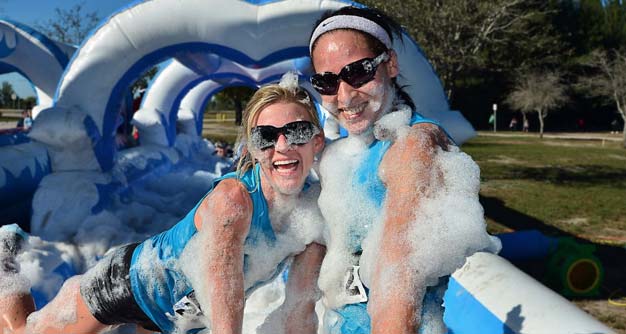 15.5 Million
number of race finishers in 2012 (56% of them female), up from 4.8 million in 1990 (when just 25% were women)
3 Million
number of participants in non-traditional runs in 2013, up from 2 million in 2012 and 1 million in 2011
$250 Million
estimated value of the obstacle challenge and themed runs industry
60%
percent of Color Run participants who have not previously run a 5k or longer
50%
percent of people who participated in obstacle and themed races who plan to participate again the next year
5, 6, 7
percent of the general population who have participated in obstacle challenges, marathons/half marathons, and themed runs, respectively

In terms of online searches, traditional events have had slow-but-steady growth, and still tower over the non-traditional events in terms of sheer volume. We only see a few notable spikes, and one major jump around the Boston Marathon bombing. Compare this with the explosive growth in searches for non-traditional races, and there you have it. Running events as a whole are growing, and we don’t see any signs that they are slowing.
Traditional Running Events

PrevPreviousBy The Numbers: The Growth of Yoga & How Yoga Brands Can Stay Competitive
NextWhy CrossFit Brands Should Aggregate Reviews to Maintain GrowthNext