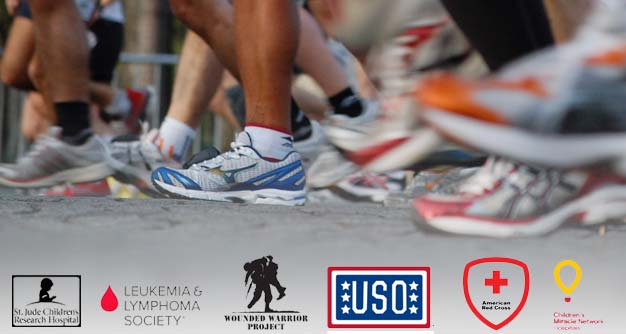 The running event season is at our doorstep. As you make your selection for which races to run this summer, we’d like to help you start to understand the charitable giving (or lack thereof) for some of America’s most popular running races and events. Which running events support which charities? Which are purely for profit? Which brands and sponsors are affiliated? We give you the -kinny in this handy-dandy outline.

Charity walks and runs have come a long way since the first one in Bismark, ND back in 1969. People enjoy running for charity because it’s a win-win. They have something to train and get in shape for, and they get to support a good cause to boot.

But is running for charity worth it? On one side of the fence, folks are asking whether charity runs are worth the effort due to the massive expense. It’s not uncommon for a charity to receive just 50 cents of each dollar earned. And then of course, there are trust issues with the charities themselves, like 2013’s Wounded Warrior scandal. Many of the popular runs today are managed by for-profits who simply facilitate participants’ fundraising. Often, the charity specifics are vague and almost feel like an afterthought.

While we’ll choose to leave the validity of charity running up for debate, we do encourage runners to be more savvy of the charitable affiliations of their favorite races. If you think you’re running for a cause, learn about exactly how your funds will be used. Push the race holders to reveal specifics. Use the below guide as a starting point.

Note: The ordering is based on the volume of social media conversations Channel Signal picked up about each one from December 2013 through February 2014. If you’re interested in a report to understand your outdoor company’s online brand engagement, don’t hesitate to contact us.

21 Runs & The Charities They Support

Type: For Profit
Location: 100+ Cities
Length: 5K
Primary Sponsor: Shout, Kind Snacks
Charity Affiliations: Global Poverty Project
From the Website: Color Runners can join the Global Citizen movement in two ways: sign up and take action on Global Citizen or sign up to fundraise for one of five amazing nonprofits that are working to end extreme poverty. Color Run also works with local organizations and has donated over $3 million to charities.

Type: For Profit
Location: 50+ Cities
Length: 10 miles + obstacles
Primary Sponsor: Reebok
Charity Affiliations: Homes for our Troops, Help for Heroes,
From the Website: Since 2004 this organization has build 100 homes for injured veterans. They have recently launched their initiative to build the next 100 homes and we’re hoping that you’ll join us to help in their mission.

Type: For Profit
Location: New York, NY
Length: Full: 26.2 miles, Half 13.1 miles
Primary Sponsor: Tata Consultancy Services
Charity Affiliations: Facilitates a variety of charities like Team for Kids, Memorial Sloan-Kettering’s Fred’s Team and NYRR’s Champion’s Circle
From the Website: Receive guaranteed entry and add meaning to your miles! Running for a charity not only provides you with guaranteed entry to the 2014 TCS New York City Marathon; it also gives you the opportunity to change lives and give back to your community.

Type: For Profit
Location: Orlando, FL
Length: Varies from Kids Run to Full Marathon
Primary Sponsor: Disney
Charity Affiliations: Leukemia & Lymphoma Society
From the Website: LLS uses theWalt Disney World® Marathon Weekend as both a platform to create awareness of this life saving cause and to raise much needed funds for research.

Type: For Profit
Location: 20 Cities
Length: 5K + Obstacles
Primary Sponsor: Harpoon Brewery, Mens Journal
Charity Affiliations: United Service Organizations (USO)
From the Website: Rugged Maniac encourages all participants to raise money for the USO.  When you register for a Rugged Maniac event you will receive an email within 24 hours that includes a link to your TEAM USO personal fundraising page.

Type: For Profit
Location: 50+ Cities
Length: 5K + Obstacles
Primary Sponsor: Mike’s Hard Lemonade
Charity Affiliations: A Child’s Hope Foundation
From the Website: We are pledging a portion of every race entry to go towards building a new orphanage. We hope that you will join us in supporting this stellar organization and exemplar cause!

Type: Non-Profit
Location: Arlington, VA
Length: Full: 26.2 miles, Half 13.1 miles and other distances
Primary Sponsor: GE, Brooks, Walmart
Charity Affiliations: Facilitates a variety of charities
From the Website: Through these charities, thousands of individuals have the opportunity to run “The People’s Marathon” while raising funds in support of a personal cause, training and finding the shared inspiration to go 26.2.

Type: For Profit
Location: Chicago, IL
Length: Full: 26.2 miles, Half 13.1 miles
Primary Sponsor: Bank of America
Charity Affiliations: Facilitates a variety of charities like American Red Cross and Ronald McDonald House
From the Website: The Bank of America Chicago Marathon hosts thousands of runners who choose to make their Chicago Marathon experience more meaningful by running on behalf of a charity. In 2013, over 10,000 charity runners participated in the Chicago Marathon on behalf of more than 140 local, national and global causes. For the 2014 Bank of America Chicago Marathon, participants will be able to opt out of the public lottery from March 19 – April 7 by choosing to fundraise a minimum of $1,000 for any of the charities that are part of the Official Charity Program.

Type: For Profit
Location: 140+ Cities
Length: Varies
Primary Sponsor: Timex, Sugoi, Newton Running
Charity Affiliations: Facilitates a variety of charities
From the Website: Through purchasing a slot with an IRONMAN Foundation charity partner, you are not only obtaining an entry into IRONMAN Boulder, but are also making a charitable contribution to a worthy cause.

Type: For Profit
Location: Philadelphia, PA
Length: Full: 26.2 miles, Half 13.1 miles, 8K
Primary Sponsor: Gore-Tex
Charity Affiliations: Facilitates a variety of charities
From the Website: The GORE-TEX® Philadelphia Marathon is pleased to partner with many wonderful and worthwhile programs that support local initiatives and benefit people from right here in the Philadelphia region, nationally and around the world.

Type: For Profit
Location: Multi-city
Length: 5K
Primary Sponsor: Smart Car, Larabar
Charity Affiliations: Varies by city
From the Website: Color Me Rad is a for-profit event. Each city has a local charity partner which will receive a portion of the proceeds. The amount is based on the size of the event and the involvement of the charity. The charity recruits volunteers whose time is compensated directly to the charity. We also provide extra donation opportunities, and we aim to generate awareness of the charity in the community. We have great relationships with our charity partners. Please contact your local charity if you have further questions.

Type: For Profit
Location: Multi-city
Length: 13.1 miles, 15K, 10K, 5K
Primary Sponsor: The Biggest Loser
Charity Affiliations: Varies by city
From the Website: In an effort to help fund community programs and development, RunWalk works with local charities in each community that we visit.

All logos are property of their respective owners. Information subject to change. Visit race website for up-to-date information.

As the holiday shopping season gets underway, we are noticing an interesting story line. Despite COVID-19, shoppers are as positive as they were during the 2019 holiday season.  In the…

Amazon’s Star Rating Is Not Enough: Here’s Why

Recently, we’ve had some of our customers say, “Channel Signal is missing reviews. We have 35 reviews on this product on Amazon and you have registered only 30. What’s up…